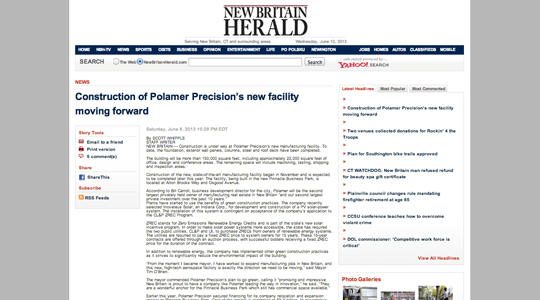 The building will be more than 150,000 square feet, including approximately 22,000 square feet of office, design and conference areas. The remaining space will include machining, testing, shipping and inspection areas.

Construction of the new, state-of-the-art manufacturing facility began in November and is expected to be completed later this year. The facility, being built in the new Pinnacle Business Park, is located at Alton Brooks Way and Osgood Avenue.

Plants have started to use the benefits of green construction practices. The company recently selected Inovateus Solar, an Indiana Corp., for development and construction of a PV solar-power system. The installation of this system is contingent on acceptance of the company’s application to the CL&P ZREC Program.

ZREC stands for Zero Emissions Renewable Energy Credits and is part of the state’s new solar incentive program. In order to make solar power systems more accessible, the state has required the two public utilities, CL&P and UI, to purchase ZRECs from owners of renewable energy systems. The utilities are required to pay a fixed ZREC price to system owners for 15 years. These 15-year contracts are offered through an auction process, with successful bidders receiving a fixed ZREC price for the duration of the contract.

In addition to renewable energy, the company has implemented other green construction practices as it strives to significantly reduce the environmental impact of the building.

“From the moment I became mayor, I have worked to expand manufacturing jobs in New Britain, and this new, high-tech aerospace factory is exactly the direction we need to be moving,” said Mayor Tim O’Brien.

The mayor commended Polamer Precision’s plan to go green, calling it “promising and impressive. New Britain is proud to have a company like Polamer leading the way in innovation,” he said. “They are a wonderful anchor for the Pinnacle Business Park which still has commercial space available.”

Earlier this year, Polamer Precision secured financing for its company relocation and expansion project at Pinnacle Business Park. Cost of the project is estimated at $9.7 million. In accordance with the loan agreement, Polamer has agreed to employ at least 122 full-time employees by March 2016.

The company is committed to the on-time delivery of high-quality parts.