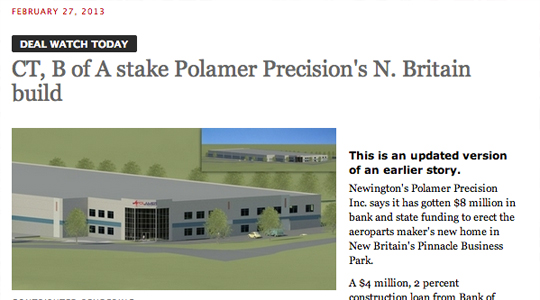 CT, B of A Stake Polamer Precision’s NB Build

A $4 million, 2 percent construction loan from Bank of America and a $4 million loan from Connecticut Innovations Inc., the state’s technology-investment arm, were the remaining pieces Polamer needed to break ground last December, the company said Wednesday.

A separate entity, Polamer Realty NB LLC, is putting up $970,000 and will own the state-of-the-art facility that it leases back to Polamer Precision, the company said.

In return for state money, Polamer pledged to employ at least 122 full-time employees in New Britain within three years. The company has 72 workers.