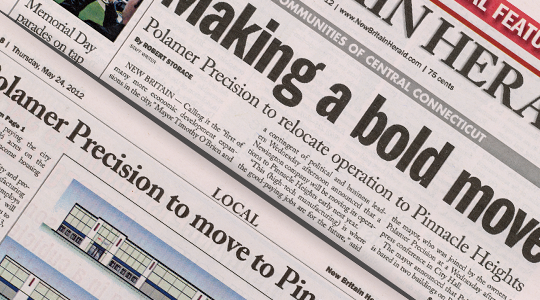 NEW BRITAIN — Calling it the “first of many more economic development expansions in the city,” Mayor Timothy O’Brien and a contingent of political and business leaders Wednesday afternoon announced that a Newington company will be moving its operations to Pinnacle Heights early next year.

“This (high-tech manufacturing) is where the good-paying jobs are for the future,” said the mayor, who was joined by the owners of Polamer Precision at a Wednesday afternoon press conference in City Hall.

The mayor announced that Polamer, which is based in two buildings on Progress Circle in Newington, is paying the city $500,000 for 8-and-1/2 acres on the site, once a low-income housing complex.

Polamer — a speciality and production aerospace manufacturing company — currently employs 65 workers. The company will employ 85 people when it moves to Pinnacle Heights by March 2013, eventually employing more than 130 workers, according to Polamer President Chris Galik.

Galik, who said Polamer “had debated for four years on whether to move here” said “the timing is perfect now.” He said the company will break ground next month.

Polamer received incentives from the city to build on the Pinnacle site, but the mayor declined to say what those incentives were.

After Polamer moves in, there will still be 40 acres of available land at Pinnacle. O’Brien said the city is in ”active discussions” with other businesses about relocating to the site.

Bill Millerick, president of the New Britain Chamber of Commerce, spoke at the press availability.

“This is a resurgence of precision manufacturing in New Britain,” Millerick said. “Mayor O’Brien has made economic development the cornerstone of his campaign. This is a thrilling day for all of us.”

Democratic Alderman Carlo Carlozzi, who attended the press conference, said, “I’m very excited about meeting a new neighbor and a new manufacturer for the city.” Carlozzi lives fewer than 1,000 feet from the site.

Newington officials said Wednesday they were not notified by Polamer of their plans to leave town.

“I would have loved to been able to see if we could have found them other accommodations in town,” Newington Mayor Steve Woods said Wednesday. “You never want a business to leave your town, but if someone thinks they’re making a good plan for their business to grow I accept that.”

While it is just a formality, the sale does need the approval of the Common Council. On Wednesday evening, the council voted to refer the pending sale to a council subcommittee for a public hearing Tuesday. The full council is expected to approve the sale at a special council meeting within the next few weeks.

The sale to Polamer comes on the heels of a $1.7 million sale of a portion of Pinnacle Heights, located in the northwestern part of the city, to a regional education group. The Capital Regional Education Council, or CREC, plans to open a 145,000-square-foot magnet school at the Pinnacle site by the end of 2013.

— Erica Schmitt contributed to this story.