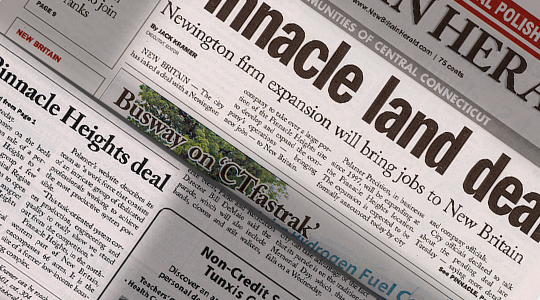 Polamer was featured on the front page of the New Britain Herald, recognized for the jobs being brought to New Britain with our upcoming new facility. As development continues for this project, so does interest for the town of New Britain and it’s citizens. We look forward to providing the area with our business and plan to further our success with customers. The article reads as follows…

NEW BRITAIN — The city has inked a deal with a Newington company to take over a large portion of the Pinnacle Heights site to develop and expand the company’s operations — bringing new jobs — to New Britain.

Polamer Precision, in businesss since 1997, will be expanding at the Pinnacle Heights location. The expansion is expected to be formally announced today by city and company officials.

The sale comes on the heels of a $1.7 million sale of a portion of Pinnacle Heights to a regional education group a few months ago, The Capital Region Education Council plans to open a 145,000-square-foot magnet school at the Pinnacle Heights site by the end of 2013. At the time the school deal was announced, officials said they thought the school would help lure future development.

Polamer’s website describes its team as “a work force that consists of an intricate group of dedicated professionals working to achieve the most productive system possible.

“This task-oriented system covers production, engineering and quality to really show we stand out from the competition.”

Pinnacle Heights, in the northwestern part of New Britain, encompasses 66 acres. It is the site of a former low-income housing complex.