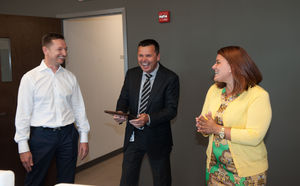 “With the opening of their new headquarters here in the city, Polamer has set the bar high for manufacturers with this state-of-the-art, high-tech aerospace facility,” Stewart said in a statement.

Earlier this year, Polamer moved from Newington to a 152,000 square-foot facility that is outfitted with rooftop solar panels that cover four acres and generate one megawatt of energy.

Stewart said the installation of the panels aligns with the city’s goal to become a greener place.

“The people that make investments and a commitment to the community deserve recognition,” she said. “What you’ve built here is beautifying the neighborhood.”

Chris Galik, Polamer’s president, graciously accepted a plaque from the mayor bearing the inscription “in recognition of their dedication and commitment to help beautify New Britain.”

“On behalf of the company, I want to thank you and the town,” he told Stewart.

He also paid tribute to other development that is occurring in New Britain.

“The transformation of this area is incredible,” he said.

Galik said Polamer is gratified to be recognized for its expansion but said much remains to be done in order to attain its vision. Within five years, the firm, which has 99 employees— more than 75 percent of whom are from the city— plans to hire to more than 200 additional workers and become a $150 million company.

“This is not a slogan. This is something we are going to achieve,” he said. “[Establishing] the facility was a big milestone, but what needs to happen inside the facility is also a milestone.”

The company took a big step toward realizing its goals in May when it signed a long-term agreement with Pratt & Whitney to make parts for jet engines that are built by the East Hartford-based manufacturer.

Galik said advanced manufacturers like Polamer will power the U.S. economically in the years ahead.

“This is the core of the economy,” he said, not the country’s current “70 percent service-driven economy,” which he called “a little bit of a questionable approach”

Stewart launched the “Beautify New Britain” campaign in January. She presented the first honor to Riley’s Hot Dog & Burger Gourmet on Glenn Street in February and the second to developer Simon Konover Co. in May. Every few months, a new business or residence will be selected to receive the award based on recommendations from municipal staff and the public.