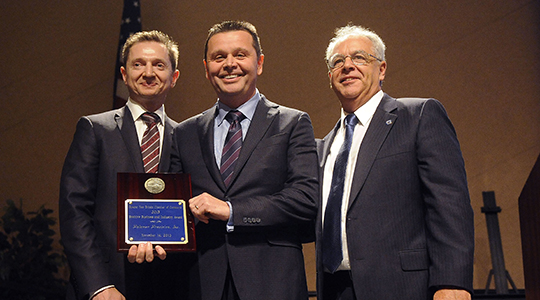 NEWINGTON — Polamer Precision, an aerospace manufacturing firm based in Newington, has been awarded a 15-year energy program contract in the latest round of Zero Emissions Renewable Energy Credit auctions.

The ZREC program is part of Connecticut’s new solar incentive programs. To foster clean energy projects the state has required the two public utilities, Connecticut Light & Power and United Illuminating, to purchase ZRECs from owners of renewable energy systems. The utilities are required to pay a fixed price to system owners for 15 years. These contracts are offered through a reverse auction process, with successful bidders receiving a fixed ZREC price for the duration of the contract.

Under this process, the lowest bidder gets the fixed price. The contract will provide a 15-year agreement for CL&P to purchase the ZREC certificates the Polamer system produces; i.e., one certificate for every kilowatt of energy produced. Polamer spokeswoman, Diana Galik, declined to reveal the purchase price.

Galik, however, said construction is underway on the firm’s new 150,000 square foot facility in New Britain’s Pinnacle Business Park. The company will relocate to New Britain upon completion of the facility in March 2014.

As part of the company’s green efforts and commitment to sustainability, plans are currently in progress to install a solar power generation system. The system, rated at 1000 kilowatts, has the ability to produce up to 1553 kilowatts. It is expected to be one of the largest industrial applications in the state and is comprised of 3000 solar panels, which equates to four acres of the roof surface.

As part of the company’s dedication to green building practices, the new facility will contain high efficiency lighting, heating and cooling systems, as well as the latest technology for compressed air generation. The building’s roof will have one of the highest reflective roof surfaces available.

In March, the company will install a GE solar, car-charging station for visitors. The station will be adjacent to the main entrance of the building. The GE charging components are designed and manufactured in Plainville.

Galik explained that the main difference between a solar charging station and conventional stations is that the solar station will use power from Polamer’s solar generating power system. The electricity being provided to it will be clean energy with zero emissions.

“Other stations would use electricity generated from conventional means,” said Galik, “such as nuclear-generated power.”