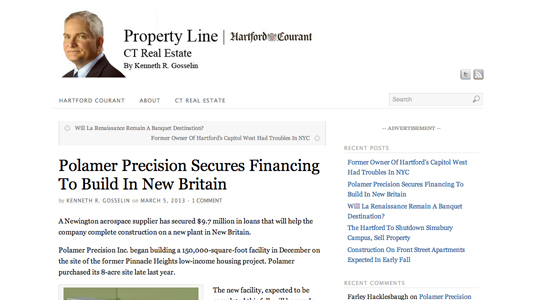 A Newington aerospace supplier has secured $9.7 million in loans that will help the company complete construction on a new plant in New Britain.

The new facility, expected to be completed this fall, will be nearly five times larger than the 33,000-square-foot building Polamer now occupies in Newington.

Polamer builds airframe components for commercial and government aircraft, and it counts Pratt & Whitney and General Electric among its customers.

The financing includes a $4 million loan from Connecticut Innovations and a $4.7 million construction loan from Bank of America. The company is providing $970,000.

The CI loan is at a fixed, below-market rate of two percent and matures in 2024. As part of the loan agreement, the company has pledged to employ at least 122 full-time employees by March, 2016. Polamer now employs 78.

The CI loan is in addition to a previous, $3 million loan from the state Department of Economic and Community Development to purchase equipment.

Polamer said it could expand to surrounding property in the future in what is now known as the Pinnacle Business Park.