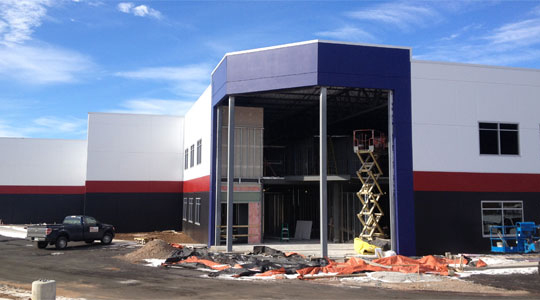 Polamer Precision to Open Late May at Pinnacle Business Park

The company first began in 1997 by current President Chris Galik and Vice President Andrew Dulnik. The two men, from Poland, both worked for a small manufacturing firm in Newington.

Their first building was a 2,000 square foot space with a few machines and a handful of employees.

“They will double the workforce of over 70 employees in the next five years,” said Carroll. “They are a phenomenal company.”

The firm consists of a highly experienced management team and a standard of operational excellence demonstrated by its co-founders with a combined experience of 50 years in the Aerospace manufacturing industry. Their employees are made up of highly educated engineers, programmers and 40 machine operators.

According to the Greater New Britain Chamber of Commerce, “With hard work, determination and dedication the company has demonstrated consistent growth during the past 17 years. The company’s most significant progress occurred during the past three years by developing and implementing the latest state of the art technology.”

Much of their work is for Pratt and Whitney Aircraft, Mitsubishi, G.E. Aviation, Samsung Industries and more.

Polamer Precision also has the first right of refusal on 8 additional acres of land at the Pinnacle Business Park next to the building and is seriously considering it, said Mayor Erin Stewart.

“I recently reviewed their incentive deal and signed off on it,” said Mayor Stewart. “I am certainly happy with selling them 8 more acres of land.”

Polamer paid the city $500,000 for the initial 8.2 acres at the site. Stewart did not say what the cost may be if the firm buys the additional 8 acres.

Carroll said the company is presently working on building the second floor of the structure and heat should be going into the building this week.

“They will have nice wrought iron gates around the building,” Carroll added. “It will be aesthetically beautiful with nice trees added and more.”

The Department of Economic and Community Development (DECD) provided a 10-year, $3 million loan at a rate of 3 percent to Polamer Precision. State funding will go toward the purchase of machinery and equipment.

The Connecticut Region Education Council (CREC) Medical Professions and Teacher Preparation Academy is building across the street from Polamer Precision in the Pinnacle Business Park. It will be 140,000 square feet holding about 750 students from grades 6-12. No date has been set yet on the opening of that facility, but officials said it is not as far along as Polamer Precision is in its construction.