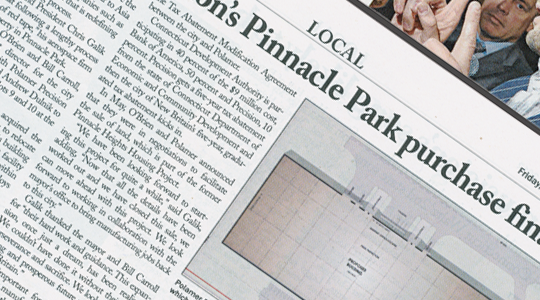 The city of New Britain announces the finalization on Polamer’s new property purchase.

NEWINGTON — Critics who believe the U.S. is losing a manufacturing cold war to Asia might take a closer look at companies such as Polamer Precision Inc., a firm that is redefining the skilled manufacturing process.

Mayor Timothy O’Brien and Bill Carroll, business development director for the city of New Britain, met with Polamer Precision executives Chris Galik and Andrew Dulnik to finalize and close the sale of lots 9 and 10 at the Pinnacle Park Project.

The Newington-based firm acquired the property — 70,000 square feet — to relocate its entire operations. The company is building a 150,000-square-foot state-of-the-art facility and will add approximately 78 new jobs within the next four years. Polamer currently employs 72 workers. The construction will start in the next few weeks and take several months with an anticipated opening date of fall 2013. PDS Engineering and Construction of Bloomfield is the construction firm.

In the final phase of negotiations, the Common Council approved the resolution in October, authorizing the mayor to enter into the Tax Abatement Modification Agreement between the city and Polamer.

In May, O’Brien and Polamer announced that they were in negotiations to facilitate the sale of land, which is part of the former Pinnacle Heights Housing Project.

“We have been looking forward to starting this project for quite a while,” said Galik, adding, “Now that all the details have been worked out and we have closed this sale, we can move ahead with this project. We look forward to working in collaboration with the mayor’s office to bring manufacturing jobs back to this city.”

Galik thanked the mayor and Bill Carroll for “their hard work and guidance. This expansion, once just a dream, has been realized. We couldn’t have done it without their work, perseverance and sacrifice. We look forward to a long and prosperous future with the city of New Britain.”

“It’s important for New Britain to start growing it manufacturing base,” said O’Brien. “And, I can think of few better ways than to welcome Polamer to the city. This kind of forward-looking manufacturing is exactly what I want to see as the core of our future.”

Carroll said the time is ripe for commercial expansion before the cost of this kind of move becomes more expensive. He stressed that commercial space in New Britain is more affordable than in other Connecticut cities and that initiative by the Chamber of Commerce and Capital Workforce Partners should result is a highly skilled workforce.

Founded in 1997, Polamer produces engine and airframe components for customers such as Pratt & Whitney and Sikorksy.